So shortly after work ended this summer, I had a bit of an art attack. I’d seen pictures on the internet of some cool paintings people had done by melting crayons onto a canvas, and I figured that it was a good time to try one out for myself. What follows is a bit of a trial-and-error method of making a few of these paintings.

Attempt #1 involved gluing a bunch of crayons to the top of a canvas and melting them with a blow dryer. Turns out: no dice. The blow dryer doesn’t get hot enough. As I was sitting out on my deck, in the scorching sun, attempting to melt these little crayons, I found it ironic that I was the one who was doing the majority of the melting. Then I thought: the sun is already melting me so why don’t I use the sun to melt the crayons?!

Attempt #2 involved me getting my eyebrow-plucking concave mirror from the bathroom and bringing it outside to melt the crayons. I held the mirror so that it reflected the sun onto the crayons. The wax splooched out of each crayon and made a little glob of hardened goo right at the top of the canvas.

The downside was that this took a ridiculously. long. amount of time … plus the wax hadn’t even made it to the bottom of the canvas before it solidified. The other reason why I don’t recommend this method: if you let the beam of light stay on the crayon paper for too long, it will start to smoulder. Oops.

So this lead to …

Attempt #3. Since we just moved, we had a lot of cardboard boxes in the basement. I lined one of them with tin foil and covered the top with saran wrap (convection: it will get you every time), and – voila – a solar cooker!

It worked remarkably well. The wax dribbled all the way to the bottom in no time.

Next, I played around with some different techniques for my new solar-cooker-art-maker! I tried lining up the crayons at the top of a second canvas and putting that directly in my solar cooker, but the wax melted out of the crayons a little too fast and made little streams all the way down. There was still a lot of white showing. This one would have looked better if, say, the canvas was already a cool colour.

Then I tried laying the canvas on the bottom of the box, and breaking up the crayons (minus the paper) in an artful arrangement. 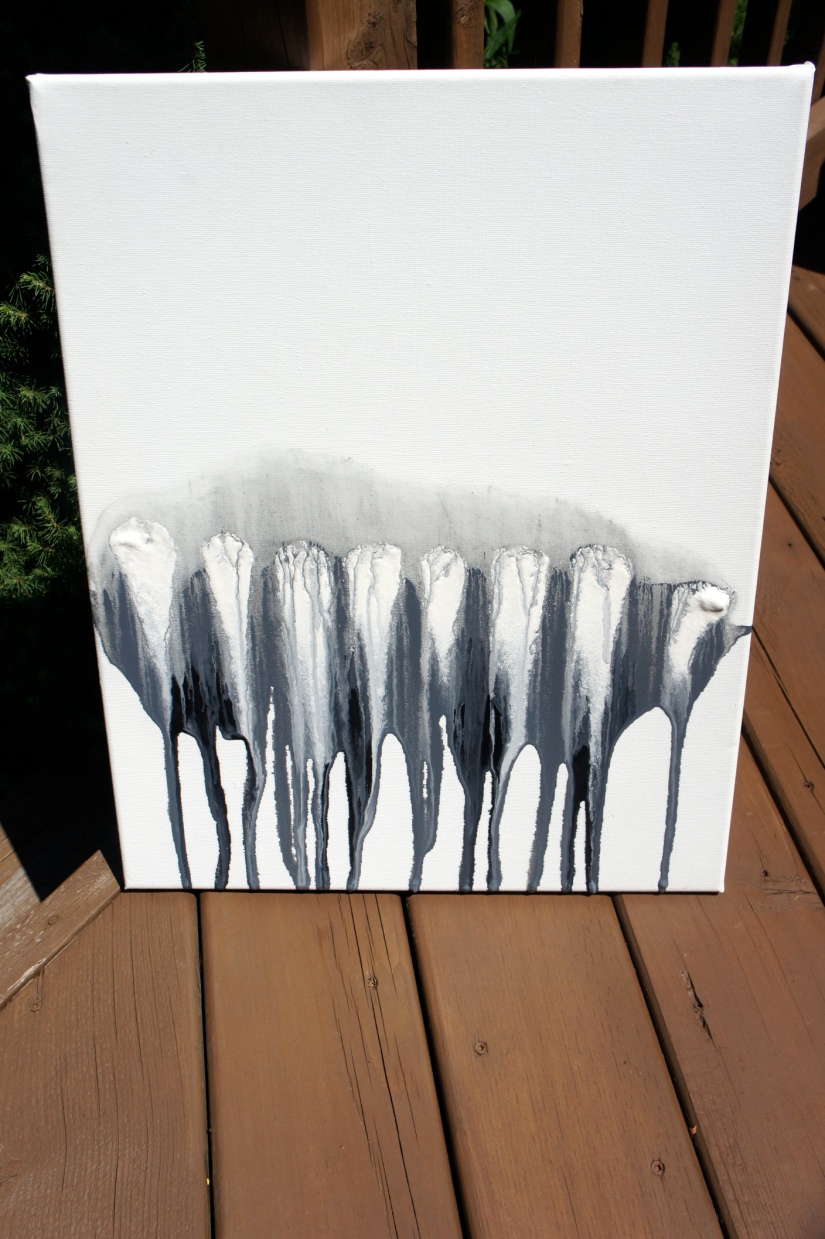 As a finishing touch on that one, I melted some brighter crayons on the top and just swirled them around. So avant garde! (I don’t actually know what that means.)

For my final painting, I broke up a bunch of colours in a pseudo-rainbow-y pattern, melted them on the canvas while it was laying on the bottom of my solar cooker, tilted it up, and let all the wax run down.

All in all: it was super fun. I highly recommend trying it. Just don’t be surprised when you poke the wax if it’s a little hot – ow.

May the fourth be with you!!
It was Ada’s first Halloween and she made her debut as a pretty freakin’ adorable Baby Yoda! I made the hat, my Mom made the coat and my Dad carved a cup. It was a group effort!!
Hey, it’s a little house that my Dad carved for my felted mouse! Isn’t it the perfect size?
Here’s a little mandala progress shot for your Thanksgiving long weekend. 😊 I haven’t been working on this for a while because I’ve been distracted by another project that I’ve been working on, so I really need to get back to my mandala!
Happy Birthday to Odis!!! 🎉 She’s 22 today!!! She is officially off the chart on the vet’s cat years-to-people years conversion.
This jackalope has been doing some gardening... unlike me! 😋