OK. So I’ve been a little obsessed with snowflakes recently. I discovered this amazing directory of snowflake patterns linked from a fantastic blog called Snowcatcher. I seriously recommend checking this out. This woman has mad snowflake-making skills. There are over 100 snowflake patterns on that directory and they are all unique. Amaze-balls.

I started experimenting with some patterns using the only white yarn that I had lying around: acrylic worsted weight. So, the first two are a little on the chunky side. 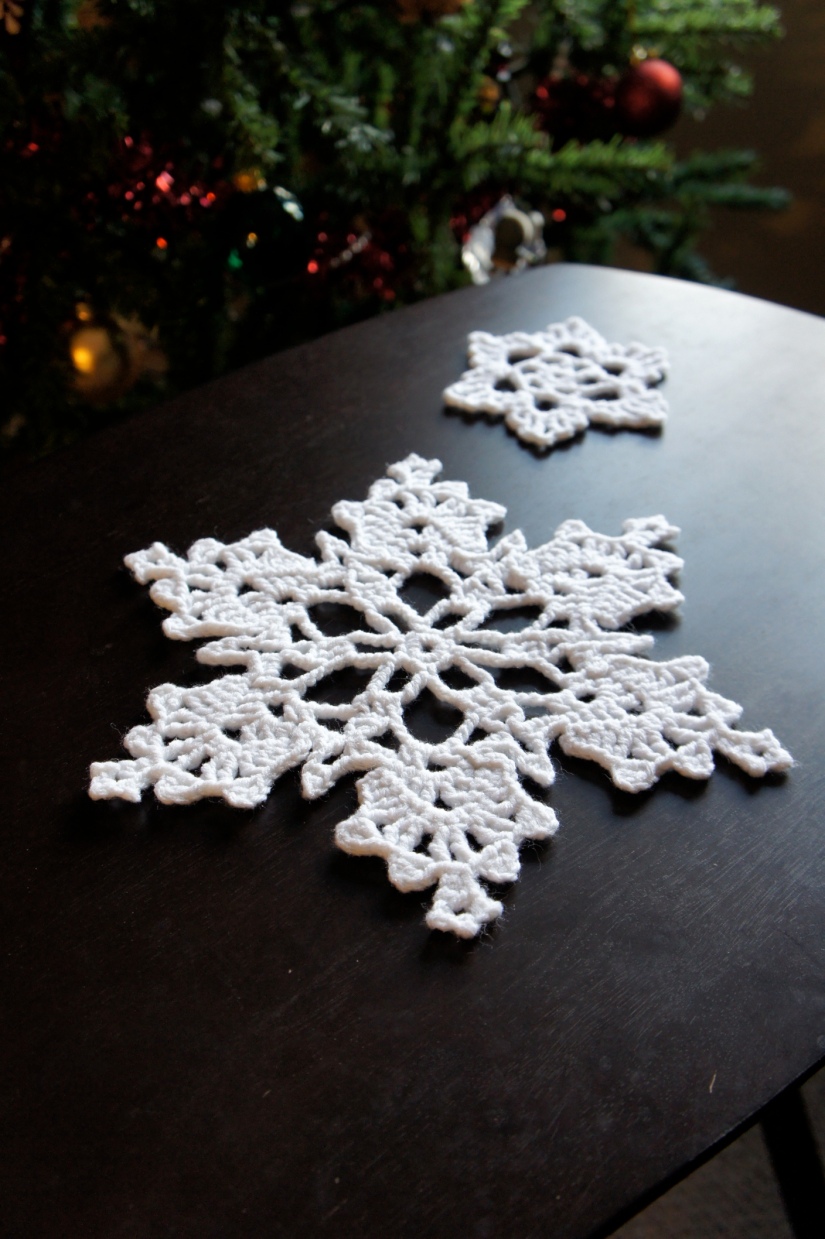 But then I went to Michaels (with coupon in hand) and purchased by first ball of skinny cotton yarn! Armed with the cotton, I went to town on more snowflakes.

One amusing thing I learned: don’t rub your eyes while you’re crocheting with this stuff because the mascara that rubs off on your fingers will show up on the snowflake. And it won’t come out easily. Rats. 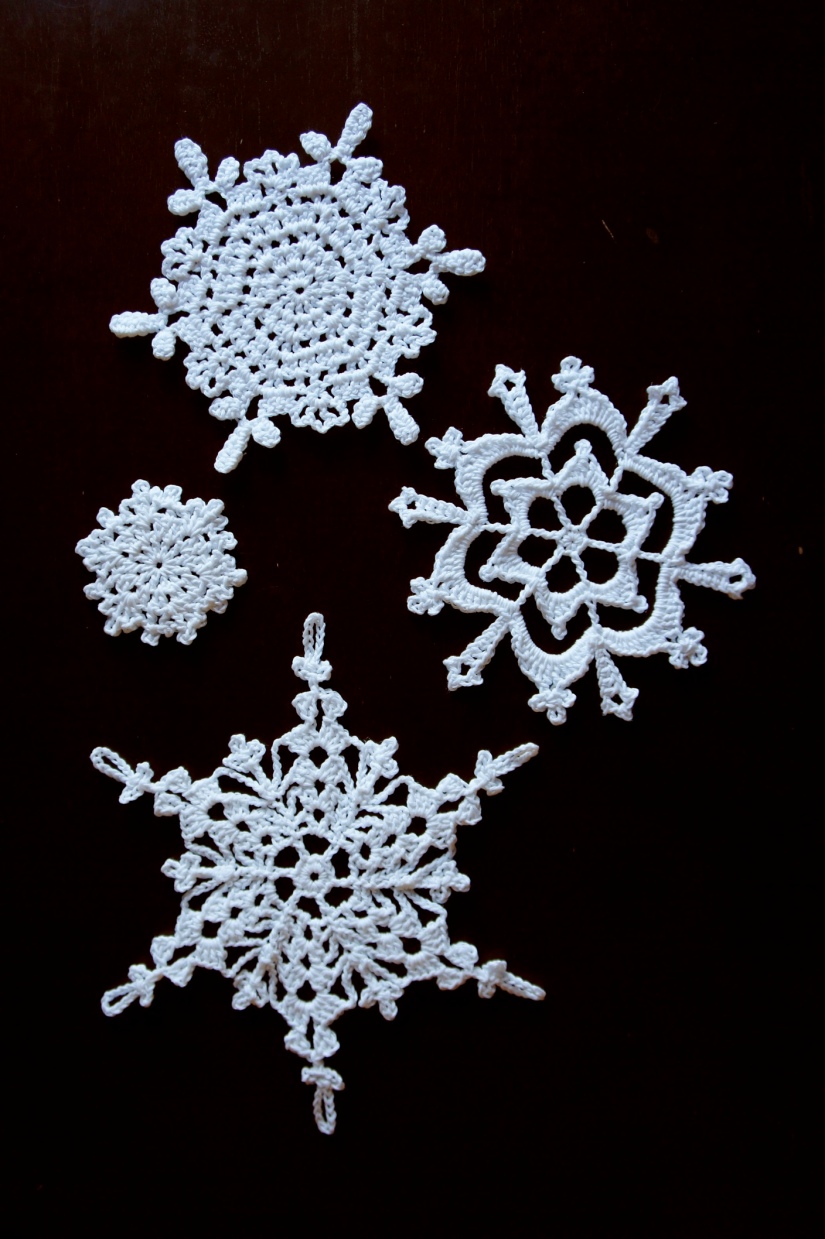 I stiffened the snowflakes by painting on a glue and water mixture. I bought some sparkles today at the craft store, so I’m planning on experimenting with them on my next two, which aren’t stiffened yet. I’m also planning on attaching a red ribbon to the tops of them, so they can be hung on a Christmas tree. 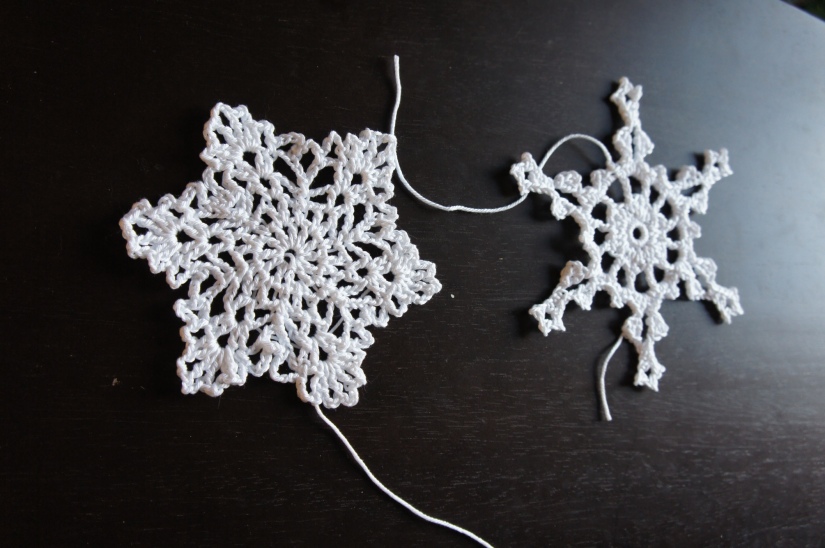 I’ve been leaving the snowflakes to dry on wax paper on the kitchen counter. They’ve sort of been taking over the kitchen lately… Mark’s starting to get a little worried. He’s asked, ‘Is this a new thing?’ (Knowing my track record on crafting obsessions, that’s a fair question.) I’ve assured him that I’m giving them all away for Christmas, so he doesn’t have to worry. Well, maybe I’ll keep just a few…

May the fourth be with you!!
It was Ada’s first Halloween and she made her debut as a pretty freakin’ adorable Baby Yoda! I made the hat, my Mom made the coat and my Dad carved a cup. It was a group effort!!
Hey, it’s a little house that my Dad carved for my felted mouse! Isn’t it the perfect size?
Here’s a little mandala progress shot for your Thanksgiving long weekend. 😊 I haven’t been working on this for a while because I’ve been distracted by another project that I’ve been working on, so I really need to get back to my mandala!
Happy Birthday to Odis!!! 🎉 She’s 22 today!!! She is officially off the chart on the vet’s cat years-to-people years conversion.
This jackalope has been doing some gardening... unlike me! 😋